The grate boiler analyzed is fired primarily with bran, which is a residue from the milling of wheat grain (outer shell of wheat) used for the production of ethanol. Bran has an ash content up to 7%wt. dry basis.

The vertical type boiler is installed in the largest bioethanol factory in Wanze, Belgium. The boiler was built 11 years ago, in 2009. Bran can be used for animal feed, but also for generating energy. The bran boiler was unable to supply all the required steam for the production plant so it was decided to use natural gas (n-gas) for the remaining energy input. The n-gas is utilized in an external superheater and the flue gas is led to the bran boiler. The plant has a capacity of burning 20 tonnes bran/hour, for a total of 75 MWth, 25 MWel (100 ton/h steam at 92 bar, 520°C including the n-gas external SH). The bran is delivered to the boiler-dosing silo and fed into the boiler with feeding screws.

The combustion takes place on a water-cooled vibrating grate, suitable for the 13.5 – 17.0 MJ/kg moist and high ash bran. The grate consists panel walls mounted on leaf springs. These panels are activated in pairs, in counter phase, by a vibrating unit. Primary combustion air is injected through holes drilled in the fins of the grate panel. The flue gas from the n-gas external superheater is mixed into the bran boiler in front of the convection section reaching a final flue gas temperature of 520°C. The bottom ash is removed with a submerged chain conveyor and carried to an open ash pit.

In order to avoid clogging, the boiler is designed with two empty boiler passes to ensure sufficient cooling of the fuel gas before entering the convection part. In that way, ash will deposit in solid form. The bran fuel is expected to generate fouling and slag on the walls in the empty boiler passes, which have therefore been equipped with water soot blowers. Downstream of the economizers, baghouse filters were installed to remove the fly ash particles from flue gas. To reduce the emissions of SO2 and HCl, NaHCO3 particles were injected before the baghouse filters.

The plant was initially operated with pure bran. However, after successful operation of a few months, according to published literature, the baghouse filters were found to be blocked by “sintered” fly ash, which could not be removed by pressurized air and hindered the continuous operation of the plant. In addition, severe ash deposition was observed in the economizers of the plant, with flue gas temperatures of 380-180°C. To minimize these problems, the plant was operated with the addition of 5-8 wt % CaCO3. It appeared that the baghouse filter problem was mitigated by addition of CaCO3 and by changing the operational condition of the filter, whereas the ash deposition problem in the economizers still appeared occasionally, based on the reported published return on experience.

BIOFACT Dashboard is a tool to predict ash related risks in combustion units. The tool has been applied to bran, and the results is reported in the following. 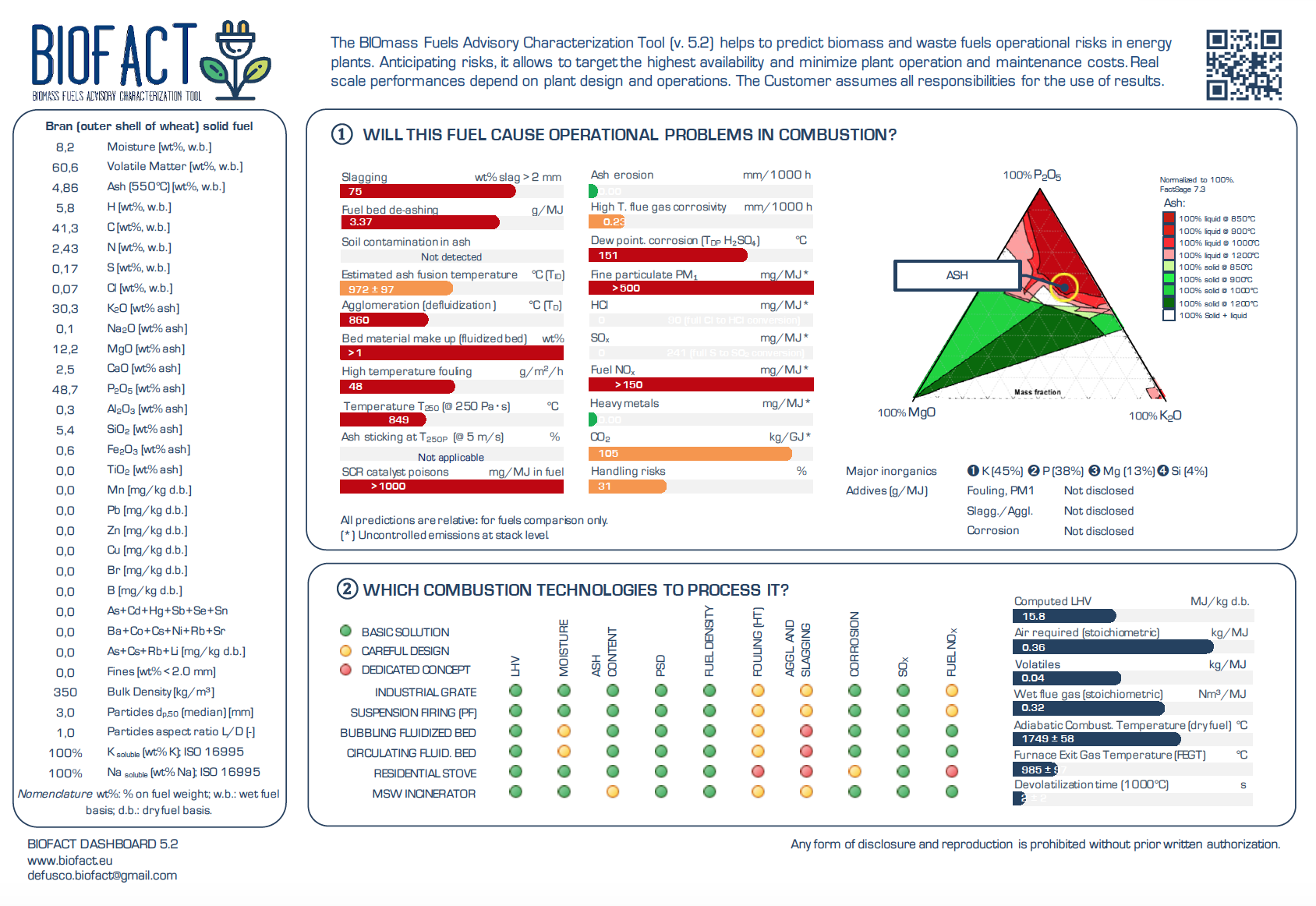 It should be noted that the composition of the bran used on the grate-fired plant varied over time, and deviates from that shown in the BIOFACT Dashboard. Moreover, CaCO3 was applied in the boiler. Due to these factors, the full-scale results can only be compared with the results from predicted data qualitatively. Emission guarantees out of the boiler (6% dry O2) according to boiler manufacturer:

Today, the biomass-fired boiler uses bran, biogas and a by-product derived from distillation such as fusel oil.

The BIOFACT Ash Chart is a high quality synthetic plot of the amounts of the inorganic fraction for 500+ solid biomass fuels. The fuels are belonging to different classes (20+) such as stem woods, barks, straws and grasses, shells and husks, fruits and residues, animal and industrial wastes. Median values for fossil fuels are included for comparison. It is useful to expand your overview on the renewable fuels portfolio.

Request us a high quality PDF suitable for A1 printing, email at defusco.biofact@gmail.com. 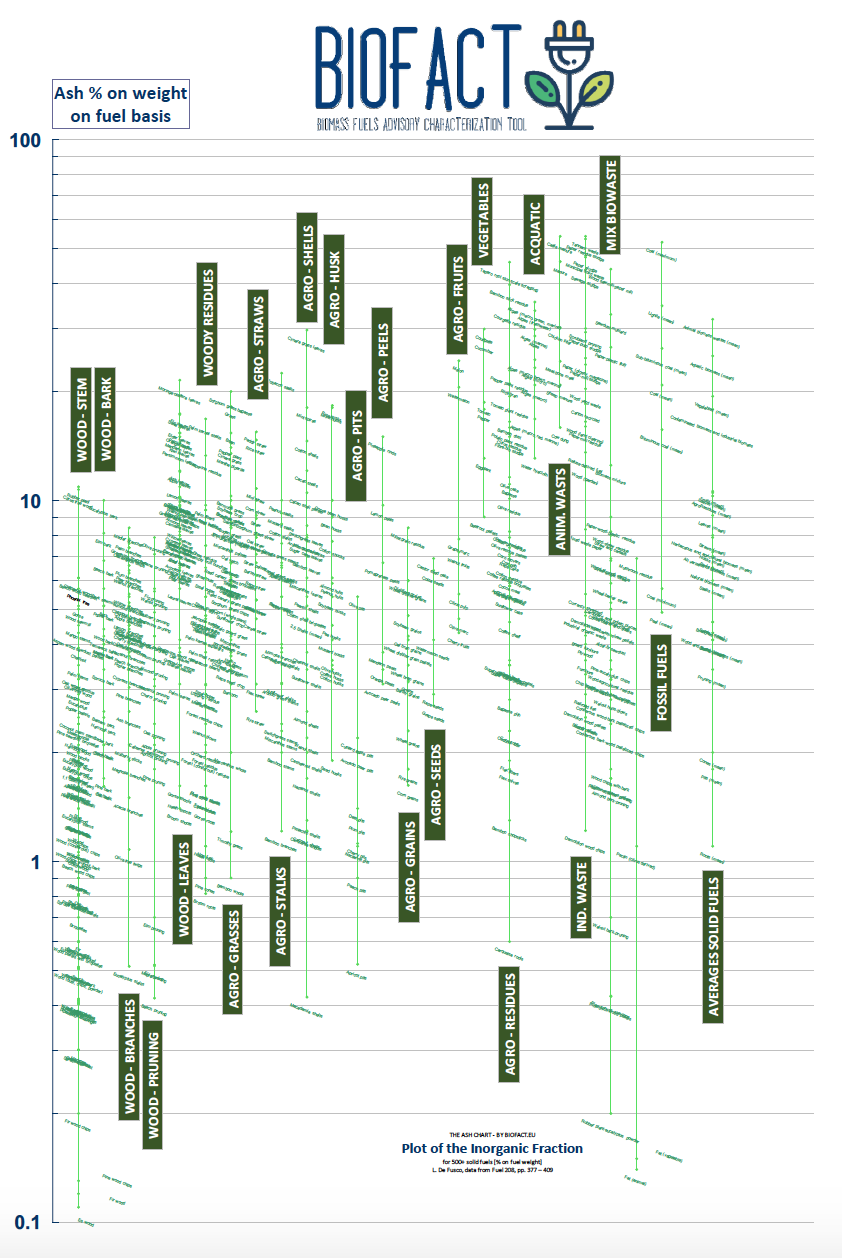 Use this tool to assess the economic return on investment from replacing an existing coal or gas boiler with a biomass boiler. 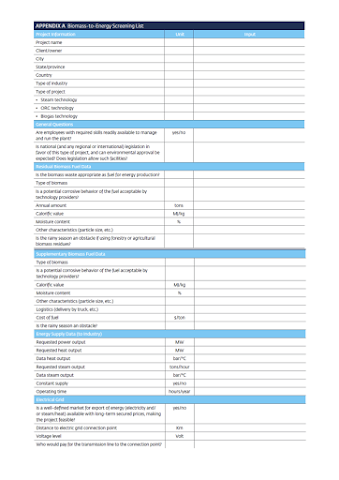 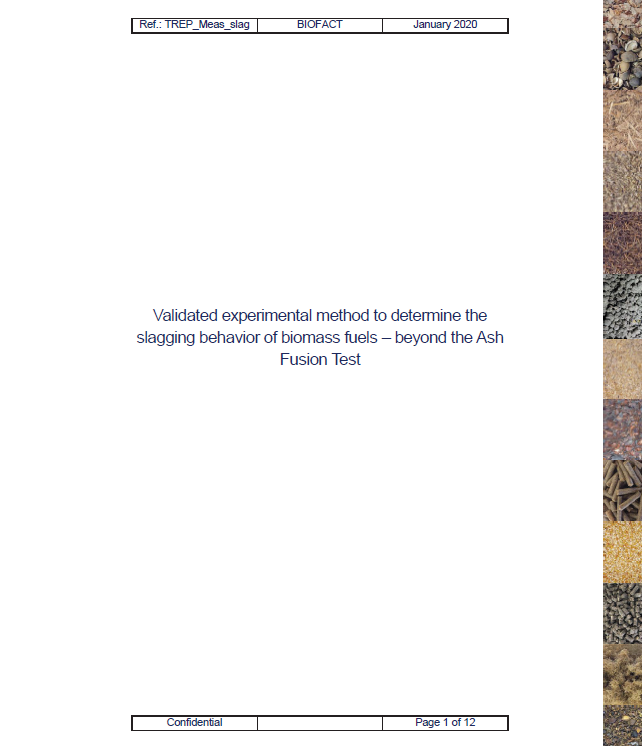 This study reviews a laboratory methodology developed in the AshMelt EU project and by the TFZ, as the current best direct experimental method to predict the slagging tendency of biomass fuels, with test results quickly available and no fuel pretreatment.